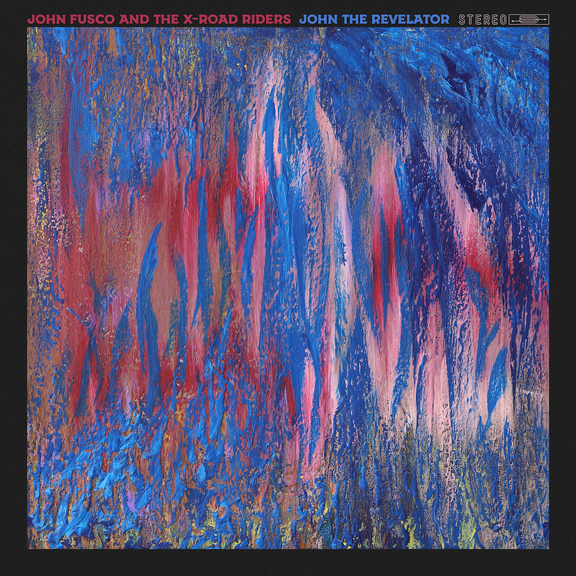 Two weeks ago, if you had asked me to list the least bluesy musical instruments, I foolishly might have included trombone. But now, having spent some time with John Fusco and the X-Road Riders’ John the Revelator, I’m prepared to admit that would have been a mistake. Because while this isn’t a trombone heavy album, the tracks featuring Sarah “The Bone Doctor” Morrow, who’s worked with no less than Ray Charles and Dr. John, are the perfect mix of fun, surprise, and of course, blues.

Singer/keyboardist Fusco is known for his path to the blues as much as for his music. Like a trombone in a blues rock band, his career arc doesn’t make sense on paper. For one thing, he’s a screenwriter from Vermont. But screenwriting brought Fusco to this album. Fusco wrote Crossroads, the Steve Vai/Ralph Macchio buddy picture. While on set, Fusco met legendary blues and session musician Jim Dickinson, who was working as one of the film’s music advisors. And Dickinson’s son Cody produced and plays on John the Revelator, the same role he held on 2019’s John Fusco and the X-Road Riders.

The album is straight-ahead blues music, with an emphasis on keyboard work from Fusco. His melodies often have a 70s’ Cat Stevens kind of sweetness. Singer Risse Norman makes frequent appearances on the album to balance out Fusco’s worn blues voice. And Dickinson’s supporting guitar (and bass, drums, dobro, plus others) bridges all of the different components, making seemingly disparate pieces make sense. Which brings us to the trombone.

The trombone isn’t completely absent from rock and roll. It’s all over ska and New Orleans jazz and funk. Wily Bo Walker even made an album with trombonist L’il Neill, The Life and Death of…, which featured the instrument. Fusco and the X-Road Riders integrate the trombone into their music in an interesting way, letting the band do their thing individually, with everyone carefully listening to each other. So on a track like “Hottest Part of the Flame,” slide guitar and slide trombone speak to each other, a common language that’s somewhere between blues and jazz. The track has a Spanish groove, which somehow makes perfect sense, even though if you stop to think about it, it’s a surprising choice. But it’s a fun cohesive tune because you can hear everyone paying attention, less concerned with familiar licks and more concerned with reacting to each other.

And even when the band locks into more traditional songs, the results can feel new. “Good Money” is a blues vamp we’ve heard before, but Morrow’s trombone gives the tune a plot twist. It’s not a sea of horns, like in an uptown blues. Instead, counterintuitively, as a smaller component of the song, it has more impact than a full horn section because you can hear Morrow so clearly. But perhaps more importantly, you can also hear Fusco and his band playing off of her.

There are some great songs here, but as a double album, it can sometimes feel a bit hard to find all of them. Fusco and his band are filled with music and made a deliberate choice to release everything they recorded, rather than hold some tunes back. And while the consumer definitely gets their money’s worth, 20 songs is a lot to process. One result is that, like his 2019 album, this one often feels like there’s no singular thread linking the tracks to each other. The beauty of modern technology is it’s very easy to select the songs you want to hear, but it would be interesting to hear this album re-worked into a tight 10 songs, so you can appreciate the subtle interactions between the musicians and not begin to take it all for granted.

– Hottest Part of the Flame