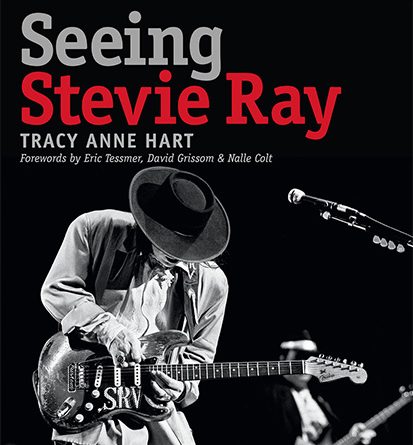 It’s been nearly 30 years since the tragic passing of Stevie Ray Vaughan, but he remains one of the most influential guitarists of all-time. Photographer Tracy Anne Hart got to see Stevie Ray’s rise up close and documented his journey through photographs, which leads us to her new book, Seeing Stevie Ray.

The book begins with forewords by Eric Tessmer, David Grissom, and Nalle Colt of Vintage Trouble, who were all heavily influenced by Stevie. It also touches on Stevie’s influences like his brother Jimmie and Buddy Guy to name a few as well as Double Trouble bandmates Tommy Shannon and Chris Layton. Tracy photographed them all.

Over the years, Tracy took countless photos of Stevie Ray. In 1986, she caught a candid moment where Stevie was signing copies of his own bootleg albums for a fan. According to Tracy, Stevie wasn’t fond of people bootlegging his music but admitted to buying anything he could find from his idols whether they were legitimate copies or not.

In 1987, Stevie played the Sam Houston Coliseum, which was his first gig after returning from rehab. Once again, Tracy was there to capture it. Tracy describes photographing Stevie Ray’s shows as “pure bliss.”

She also documents her final meeting with Stevie backstage at a show in June of 1990.

The book also features other artists Tracy has photographed and have been influenced by Stevie including Doyle Bramhall II, Gary Clark Jr., and Stevie’s nephew, Tyrone (Jimmie’s son).

Texas Flood: The Inside Story of Stevie Ray Vaughan Giveaway