Tyler Bryant has been a busy man. In the year or so since his debut EP From the Sandcastle was released, the fascinatingly skilled performer has been touring a great deal, while also preparing for his proper full-length debut album, Wild Child. And his band The Shakedown has been there to back him up every step of the way.

From the Sandcastle was a fantastic piece of big, open rock and blues, and really stood on its own as a rock-solid introduction of Bryant to the world. With the upcoming release of Wild Child, however, the whole experience has been cranked up several notches of legitimacy further, something that hadn’t even seemed possible. Huge amounts of experience and expertise have been poured into this album, and it definitely shows.

From the opening notes of Wild Child, it is clear this is a band that absolutely knows what it’s doing. Everything is just right. The songwriting is simply sublime. The performance is extremely tight, focused, and expansive. And while not lacking in the least on From the Sandcastle, the production quality has been dialed up as well. This is an amazingly huge-sounding album. Nearly every track could be a single, and each one commands undivided attention. Even so, the album works exceedingly well as a cohesive unit, all while packing in a fitting amount of musical variety.

The styles vary from some hints of more traditional blues influences on “Poor Man’s Dream” to more progressive blues-infused rock similar to The Black Keys on tracks like “Say A Prayer” and “Last One Leaving.” The latter immediately felt reminiscent of the Keys’ hit “Gold on the Ceiling.” This is a very impressive, essentially perfect album. Honestly, basically any track could have been listed as one of our ‘Can’t Miss Tracks.’

Simply put, Tyler Bryant and the Shakedown have totally, unequivocally arrived. And this is only their first full length album. It’s unbelievably exciting to consider just how far this act will go when they’ve achieved what they’re ultimately capable of. Wild Child is a massively impressive effort by one of the most promising groups today. If you’re skeptical, just listen to “Last One Leaving,” the first single from the album and you’ll see. We may already have the greatest record of 2013. 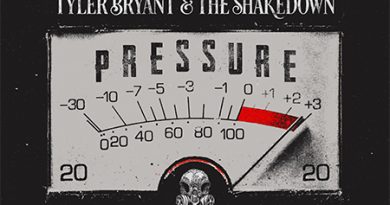 10 thoughts on “Tyler Bryant and the Shakedown: Wild Child Review”