Jeff Beck is a legendary English blues rock guitarist. He was a member of the Yardbirds in the mid 1960s along with Eric Clapton and Jimmy Page as the lead guitar. His style of playing was classified as “Raga Rock” since his sound was influenced by the Indian sitar. His technique consisted of furiously intricate playing modified by various electronic gadgets that later influenced every genre from heavy metal to jazz-rock. After leaving the Yardbirds, Beck formed the Jeff Beck Group consisting of a just discovered shy singer named Rod Stewart and his friend Ron Wood on bass guitar. Over the course of six decades, Jeff Beck has released 17 studio albums and half as many live recordings along with winning eight Grammys and being inducted into the Rock and Roll Hall of Fame twice. 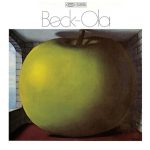 Flash was released in 1985 and won a Grammy for “Best Rock Instrumental Performance” for the composition “Escape.” The biggest radio hit off the album was a version of Curtis Mayfield and the “Impressions” 1965 “Civil Rights” anthem “People Get Ready.” It was a reunion with former “Jeff Beck Group” member Rod Stewart on vocals and reached the number 5 position on “Billboard’s Mainstream Rock.”

Beck Bogert and Appice is the only studio album of the trio composed of drummer Carmine Appice and bass guitarist Tim Bogert, both formerly with “Vanilla Fudge” and “Cactus” with Jeff Beck on lead guitar.

Jeff Beck’s debut album after leaving the Yardbirds was the 1968 release of Truth. It included Jimmy Page’s composition written for Beck titled “Beck’s Bolero.” The song was recorded with an early version of Led Zeppelin with Jimmy Page, John Paul Jones, and Keith Moon all Jamming together with Beck. The name for Led Zeppelin was reportedly first suggested by Moon at that session.

The album is influenced by the music of Stevie Wonder and Herbie Hancock while at the same time Beck was then co-headlining with John McLaughlin’s Mahavishnu Orchestra. Keyboardist Max Middleton provides the musical foil for Beck’s guitar to sing with rapturous abandonment in response to. One of the best examples of this interplay is “Scatterbrain” which was co-written by Beck and Middleton.

Jeff Beck released Guitar Shop in 1989 and it won a Grammy in 1990 for “Best Rock Instrumental Performance.” The album’s lineup included amazing rock drummer Terry Bazzio and producer keyboardist Tony Hymas who also wrote or co-wrote every song on the album. The album is completely guitar driven as Beck reaches a new level in guitar prowess through a variety of musical styles.

Jeff Beck’s seventh studio album since leaving the Yardbirds is a certified platinum jazz/funk offering with pure guitar experimentation that produces exceptional results. Rather than being involved in writing material for the album, Beck left that to his band while he concentrated on interpreting what they presented to him. With Jan Hammer in the group, it was a continuation of his Mahavishnu Orchestra jazz /rock fusion experimentation.

When Who Else was released in 1999 it was the first album of original new material in a decade since 1989’s Jeff Beck’s Guitar Shop. It was greedily welcomed by guitar aficionados and fans alike. The album contained a large assortment of musicians that included Jan Hammer and Tony Hymas who either wrote or co-wrote all but two songs on the album. The album opens in the rock genre and moves towards techno jazz/fusion along with ethereal guitar runs. “THX 138” is a frantic guitar run reminiscent of early 1960s guitarists like Duane Eddy and Dick Dale while “Declan” sounds Celtic.

Jeff Beck’s most recent release is 2016’s Loud Hailer which is composed entirely of compositions co-written by Beck except for “Edna” which is his alone. The album includes vocalist Rosie Bones and is a showcase for Beck to demonstrate the fact that his guitar playing still rocks and is capable of captivating listeners with other worldly sounds. Songs range from the opening with “The Revolution Will Be Televised,” countering the 1960s belief that it wouldn’t be, to “Scared for the Children,” a disturbing description of the present.

Live At Ronnie Scotts is available both as a CD and a DVD and is an amazing array of musical selections that spans Jeff Beck’s entire career and the encore with Eric Clapton is amazing. The album was recorded in 2007 and released in 2008 winning the “Best Instrumental Rock Performance” Grammy for the album’s version of the Lennon/McCartney song “A Day in the Life.” The band is comprised of  Tal Wilkenfeld on bass, Vinnie Colaiuta playing drums, and keyboardist Jason Rebello. The album’s version of “Scatterbrain” was included in the setlist for Guitar Hero 5. Vocals are included on a few numbers with Joss Stone singing “People Get Ready” and Imogen Heap on “Blanket” and “Rollin’ and Tumblin’.”

Still On The Run: The Jeff Beck Story to be released in May