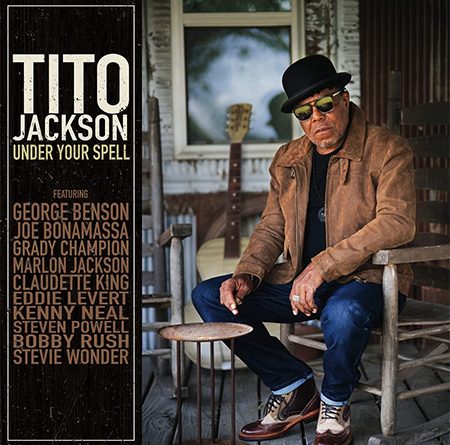 Tito Jackson is a Rock and Roll Hall of Fame member and musical royalty. As part of the Jackson 5, he and his family trailblazed a path of pop and R&B that launched the careers of The King of Pop, Michael, and his sister Janet Jackson. Tito as well as his other siblings were always in the shadows of Michael and often disregarded as a lesser artist because of Michael’s success. When in reality almost all artists will fail the comparison test to the musical genius of Michael. That being said, Tito an artist in his own right, has released a traditional Blues / R&B record entitled Under Your Spell.

When I first heard Tito Jackson was putting out a Blues release, I didn’t know what to expect as his previous releases have been more Contemporary R&B or Pop leaning. Tito pulls out all of the stops on this release and incorporates an amazing roster of his friends and family to help him out. Stevie Wonder, Bobby Rush, George Benson, Joe Bonamassa, and Kenny Neal are just a few of the artists who contribute to this release. The production and feel of Under Your Spell has a mix of modern production and contemporary blues of years gone by.

The lead track “Wheels Keep Turning” starts off the release, and is an immediate feel good, up tempo blues shuffle. The song is accented by stylistic horns and guitar that instantly lock into the groove of the song. Upon hearing this first track, I immediately began wondering if the rest of the release would hold up to the first track… it does.

“Love One Another” is the lead single off the release and a song that spreads a message of hope and reconciliation all while utilizing an all-star cast in the video to accomplish the goal. The video starts off with an intro from his mother Katherine and ends with an outro from actor/comedian Chris Tucker. Also featured in the video are dozens of guests including Morris Day, Janet Jackson, Jermaine Jackson, LaToya Jackson, Magic Johnson, Mike Zito, Bobby Rush, Smokey Robinson, and many more.

The album’s title track “Under Your Spell” is a swampy groove featuring slide guitar work by Joe Bonamassa, blended with an interesting mix of horns and programmed drum beats… similar to what you would expect to hear from Fantastic Negrito. “Big Leg Woman” features Kenny Neal and is a slow blues track that has hints of the trademark “Jackson falsetto” that helped make the Jacksons a household name. “Your Gonna Push to Far” has a funky groove that’s reminiscent of a Robert Cray track. The song has a driving bass line accented by horn arrangements and flowing background vocals.

“That Kind of Love” has an up tempo traditional shuffle and background vocals that remind you of old quartet gospel music. “Rock Me Baby” is a remake of the blues standard but stands out, due to the duet with Claudette King and guitar work George Benson. Claudette’s voice gives the song a little vocal grit which is a nice accent to the smoother, polished vocals of Tito. George’s guitar work is masterful as always and compliments the vocals of both on the song.

Under Your Spell is a sophisticated blues record that incorporates great musicianship, good songs, and the very smooth vocal stylings of Tito. If you are looking for a very good contemporary blues this release then this may be for you. After listening to this release I hope Tito decides to continue down this path and release more blues records.

– Love One Another
– Under Your Spell
– Rock Me Baby