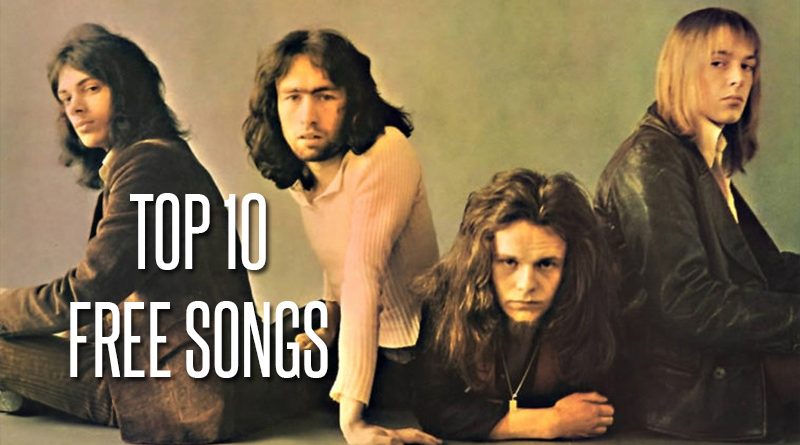 Free is one of the most important and influential English bands of the late 60s and early 70s British blues boom, although the group’s very strong catalog is sometimes overshadowed by their mega-hit and classic rock radio staple  “All Right Now”. The band, whose classic line-up consisted of drummer Simon Kirke, bassist Andy Fraser, guitarist Paul Kossoff, and lead vocalist Paul Rodgers, was formed in 1968 and released six studio albums before disbanding in 1973. In their short-lived, albeit prolific career, Free placed themselves among the finest bands of their generation and released some extraordinary blues-based hard rock music.

Our list starts with this heavy blues rocker that opens the B-side of Free’s second and self-titled album. The song is distinguished mostly by Kossoff’s mighty bluesy riffs and Paul Rodgers’ powerful, untamed and sexy vocals that just send chills down your spine. If you want to know why Rodgers is nicknamed “the voice”, start with this track.

This beautiful piano-ballad is taken from the band’s fourth album, Highway. In this record, the group takes a more laid back and mellow approach to songwriting, laying aside most of their heavier side. Despite disappointing sales and mixed critical reception, Highway presents us with some great music, like this emotional, touching, and intimate masterpiece.

It isn’t any secret that Paul Kossoff was a massive Eric Clapton fanboy (actually, who isn’t?), so Free’s rendition of Cream’s “Crossroads” makes total sense. Recorded live (and released in a number of compilation albums after the end of the band), the song is structured around a somewhat funky groove, provided by Fraser and Kirke, that lays the groundwork for Kossoff’s blistering solos, and Rodgers’ gritty wails. At the end of this superb performance by the whole band, you might even begin to think that Robert Johnson wasn’t the only one that might have traded his soul for musical talent.

The opening track and single of Free’s last album, Heartbreaker, is the band’s second most well-known song, and there’s a good reason for that. This steady-paced hard rock song’s highlights are its great guitar riff, short yet touching interlude, and passionate vocal delivery, which makes the lyrics about the risk of losing a close friend to drug addiction or depression (depending on your interpretation), make an even bigger of an impact.

“I’m a Mover” is the sixth track on Free’s debut, Tons Of Sobs.  When the album was recorded, none of the band members was older than nineteen, with Andy Fraser being just sixteen years old (!), however, they put out a very mature performance, and this track is a prime example of it. Propelled by Fraser’s punchy bass, supported up greatly by Kirke, and Kossoff’s fiery leads, Rodgers puts out one of his finest and most primal vocal takes. It’s not any wonder that this cut influenced some heavier acts, like Iron Maiden, that covered the song.

This melancholic and beautiful piece of music is also featured on the band’s self-titled album. Rodgers shows all his versatility as a singer as he provides a tender and calm execution, which is accompanied by atmospheric backing vocals and delicate acoustic guitar chords. However, the song’s crowning achievement is, in my opinion, the exquisite and haunting flute playing, courtesy of Traffic’s Chris Wood.

The monumental title-track of Free’s most successful album couldn’t be left out of this list. A straightforward and riff-driven hard rock take, the song brings everything Free’s is so good at to the table, especially Kossoff’s leads. The track is also easily recognized by its sing-along lyrics (about a failed relationship) and extremely catchy chorus. A stupendous triumph for the English quartet and bluesy hard rock in general.

This catchy song about a one-night-stand, as you may already know, is one of the most well-known classic rock songs ever with its single version being massively overplayed since it debuted in the UK charts in 1970, after the release of the Fire And Water album. Naturally, there’s a good reason for that, as the song is just too good. It’s built around Kossoff’s tremendous riff, with Fraser and Kirke keeping up the rhythm, allowing Rodgers to deliver his potent vocals, with, of course, his trademark luscious bluesy swagger. The song also showcases a stellar guitar solo by Kossoff, filled with his memorable and inimitable vibratos. With this track, Free made history and defined an era.

Free’s version of Albert King’s “The Hunter” (appearing on Tons of Sobs) is the blues taken to a stellar new level and one of my favorite covers ever. The splendid track showcases the entire band’s skills and features outstanding and rocking guitar and organ solos. However, Paul Rodgers is the one stealing the show here, giving one of the best performances of his entire career with his uncompromising and wild delivery. You better believe it, he’s really the hunter.

Free’s ultimate song is this tremendous version (also taken from Tons Of Sobs) of the famous blues standard, “Goin’ Down Slow”, by St. Louis Jimmy Olden. The song, which is about the lament of a man confronted with his imminent death, is taken to dramatic new heights thanks to Kossoff’s abrasive and incessant soloing (backed up brilliantly by Kirke firm drumming and Fraser’s robust bass playing) and Rodgers, in the peak of his form, raw and high- powered howls. This is blues rock at its most epic and imposing best.