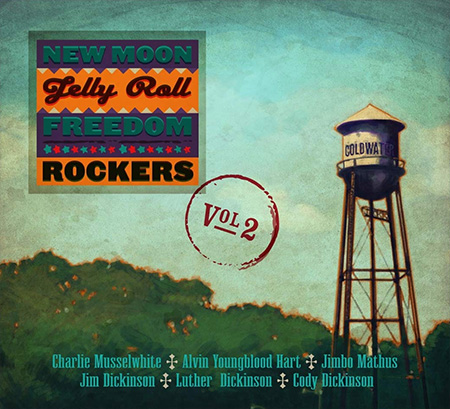 New Moon Jelly Roll Freedom Rockers Vol. 2, the second album from a lost blues super session, picks up right where Vol. 1 left off, a continuation of the same soulful, authentic music. It doesn’t break new ground the way a traditional second album might, but given the strength of the performances, it’s wonderful hearing another great 11 songs from these talented musicians.

It’s a true group effort, with Musselwhite, Mathus, Hart, and the eldest Dickinson each getting lead vocal moments (Luther gets the lead on an instrumental and Cody generously organizes everyone with his drumming). But even the lead moments have a charming, low-key selflessness. The musicians all support each other, so the distinction between fronting and backup is really the semantics of the main vocalist. No one artists dominates tracks, with everyone’s voice heard.

Musselwhite’s vocals, as on Vol. 1, are a revelation. He’s such a good harmonica player, it’s easy to forget his easy, bluesy voice, that swaggers with an unhurried confidence that’s the opposite of his harp work, which has a desperate persistence. He sounds almost jazzy on “Black Water,” one of his own songs, his vocals and harmonica shaping the song, but with Jim Dickinson’s insistent piano giving the track texture. Guitars intermingle beneath it all, making it tough to figure out who’s doing what, although you have to assume the gorgeous slide lines belong to Luther Dickinson.

“Can’t Stand to See You Go” is a Jimmy Reed tune and Jim Dickinson vocal, Dickinson’s barrelhouse piano providing a song within the song. The vocals are deceptively straight-forward, perfect for Jim’s voice, although it’s deeper than Reed’s. Jim slows things down and gives the rest of the band plenty of time and space to stretch out. There’s no urgency and the track is almost Zen in its simplicity.

Dickinson’s been playing Reed tunes since high school, something he wrote about in his 2017 memoir, I’m Just Dead, I’m Not Gone. He writes about Reed’s influence on some early Memphis gigs, when the then-teenaged Dickinson switched from piano to guitar: “Playing guitar drunk and playing piano drunk are different things,” he recalled. “On a piano all you have to do is avoid the cracks. Our gigs suffered. I would do one Jimmy Reed song after another, which was not yet popular with the crowd.” I’m not sure what the execution was like back then, but you certainly can’t find any fault now.

Hart has one of the album’s nicer moments, with his own “Millionaire Blues (If Blues was Money),” a country blues that gives everyone an opportunity to stretch out, the entire performance feeling like a historic field recording captured on modern equipment. Hart’s work across the two albums is especially interesting, as he, more than anyone else, touches on so many different styles throughout the sessions.

Fans of Vol. 1 are going to want to jump on this, but for anyone who missed it the first time, it’s worth grabbing both and considering this a double album from a special group of musicians. The music was already lost once. Don’t let it become lost again.