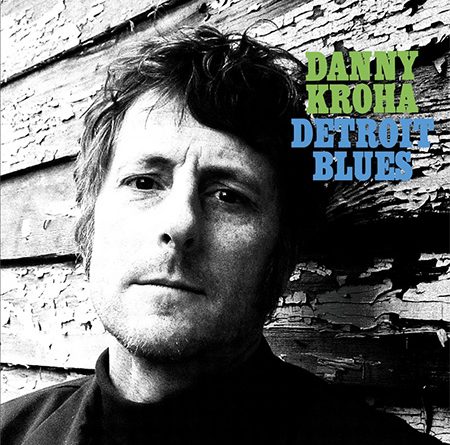 Picking up where 2015’s Angels Watching Over Me left off, Detroit Blues finds the versatile Danny Kroha expanding upon his modern interpretations of some of the earliest known folk and blues music. For listeners more familiar with Kroha’s work with punk rock outfit The Gories and glam rock band Demolition Doll Rods, the solo acoustic turn may come as a surprise, but it merely serves as another example of Kroha’s artistic breadth.

Detroit Blues takes the same approach as its predecessor. The songs are essentially modernized field recordings that would fit into the Alan Lomax collection if not for their superior sound quality. Compared to Angels Watching Over Me, Kroha ups the production value just enough to focus the listener’s attention directly on the originality of his compositions and their stripped-down beauty. All fourteen tracks live somewhere within the bounds of blues, folk, and gospel taken from an era that predates post-war blues, and in some cases, pre-war blues. Technically the album consists solely of covers, but with the creative arrangements, additions, and Kroha’s stellar musicianship, the songs could easily pass for originals.

On “Poor Howard” and “Detroit Blues,” Kroha’s rhythmic, punctuating guitar, and distinctive vocals create a retro sound that transports the listener back decades. The sparse instrumentation of resonator guitar, washtub bass, and percussion provided by tapping feet, allow space to let the music breathe. With just a simple switch of picking patterns and a different emotional vocal tone, Kroha makes each song unique even when using the same instruments. With its neat syncopative twists, “I’ll Be Rested” displays Kroha’s technical prowess, even if he usually opts to keep songs brief.

Kroha reaches all the way back to the 19th century to reinvigorate “Oh Death,” one of the album’s best numbers. “Run Johnny” is one of the most interesting tunes if just for the eclectic choice of including a minute and a half instrumental dedicated to the jaw harp. And in “Come out the Wilderness” Kroha finds the zenith of Detroit Blues through the simplest of verse structures centered around his homemade string instrument. Perhaps the song that best captures the spirit of the album is “House of the Rising Sun.” Being so well known, it serves as the best example of what Kroha has done with the selections—going beyond standard covers and really deconstructing, and then reconstructing songs that have been around for generations. Many of the other tunes are obscure enough that listeners might be hearing them for the first time in any form, and thus not immediately noticing the brilliance in Kroha’s transformations.

Having said that, some listeners might not find the album to be their cup of tea. It’s not as glitzy and bombastic as other modern blues, because it leans heavily on older traditions that have been largely ignored in recent years. That is unfortunate, because the album is a winner on many levels. Nuance, authenticity, and emotive playing factor into every track of the set. If not for the fertile mind and practiced hands of Kroha, the concept might not have worked so well. For those willing to listen attentively, they will find a modern blues gem that has both feet firmly in the past and in the present. It is a masterful feat, and Detroit Blues might be Danny Kroha’s best work to date.

– Come out the Wilderness