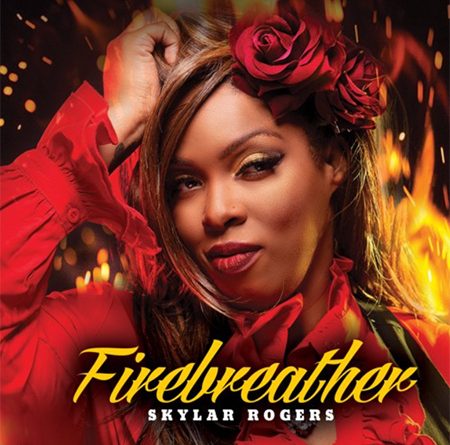 Firebreather is the first full-length effort from Chicago singer Skylar Rogers, very much worth checking out. The album, for the most part, is a satisfying combination of blues and hard rock with some soul elements, including not only great performances by Skylar but also from her accompanying band, The Blue Diamonds.

The album begins with “Hard Headed Woman”, a short, mid-tempo, blues-rocker with a solid performance from the whole band. It’s a good start. The second track is “Back To Memphis”, another mid-tempo blues-rocker, yet it sounds much more inspired and packs more of a punch, especially regarding the vocals. It will surely find its spot on my travel playlist next time I hit the road. The third song is “Work”, a plausible performance, however a forgettable one. There’s actually a nice keyboard section in the track but guitars and vocals sound somewhat bland.

The next one is “Like Father Like Daughter”, the album’s single. It’s a slightly faster tune with energic vocals and blazing guitar work. Of course, Both rhythm and lead guitar playing are mostly exceptional in the whole album, but on this one here they stand out. It is a truly great song. Then, we are presented with the album’s first ballad. “Failure” is a beautifully sung. Next, the title track follows with some hard-rocking guitar riffs and solos and another strong vocal performance, with bass and keyboard also blending in nicely. Another standout track, definitely. “Moving on” is the most different tune on the album since the guitars take a back seat and let the keyboards drive the song. It’s a fun number with uplifting lyrics.

The next and eighth song, in my opinion, is the album masterpiece. “Drowning” is a heavy blues power ballad. Skylar’s soulful and robust vocal execution and the massive and steady guitar riffs and dramatic solo gave me chills. Bass and drums play their part well too and the icing on the cake is the beautifully haunting piano. A truly raw display of blues power. “Thankful” is another ballad with a pleasant vocal approach and melody. A good song, but nothing special. “Insecurities”, the album closer, has a lighter tone and a nice pop hook that’s very enjoyable to listen to after it grows on you. Lastly, it’s also important to mention that the album production is very clear, although, in some sections, I think keyboards should’ve been a little higher in the mix.

To conclude, Firebreather, while not perfect, is an exciting release from a promising new blues powerhouse, one that has the potential to become a genre household name in the future.