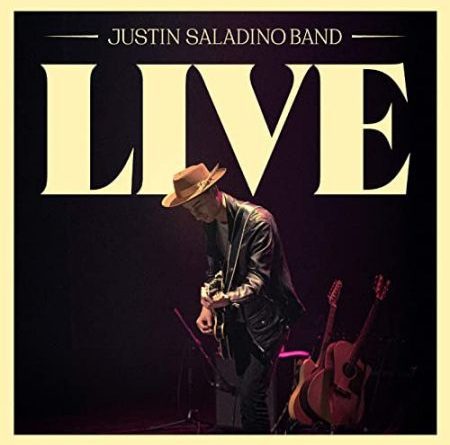 After the EP (No Worries – 2016) and one studio album (A Fool’s Heart – 2018), the Canadian blues rocker Justin Saladino releases JSB Live, gathering his greatest hits recorded live in the studio. The album is a rewriting of the songs released in the Saladino’s previous albums, with new arrangements, mood, and solos. In a certain way, it seems that JSB Live is a gathering of songs that were shaped and polished on the road, upon numerous stages. This process, inevitably improves the songs, summing notes, and arrangements where it is necessary and removing it otherwise.

One important feature to highlight is that most of the songs start calmly, and progressively gain strength, increasing the volume when finally they reach the apex. For an intent listener it is great to hear every instrument gaining volume, and gradually becoming the protagonist of the song, until another instrument restarts this cycle. You can check this in “Peace With You” and “Put The Hammer Down”, for instance.

The album includes just one cover song, “You Don’t Know How It Feels”, written by Tom Petty, but in Saladino’s hands, it gains totally new approach. “Purple Girl” is a song that makes evident the Jimi Hendrix influence on Saladino, with “broken” guitar riffs and stepped rhythm. In “All You Ever Need” and “A Fool I’ll Stay” the guitar solos take an important role, alternating the mood throughout the songs.

In this album, Saladino did an amazing job with the guitars, notching fuzzy lines into the songs. In some tracks, the overdrive tones bring the guitar to the front line of the band. The side musicians do an excellent job too, bringing the song in the first place and “making the bed” to Saladino’s guitar and vocals.

Definitely, JSB Live, really gets the spirit of a live performance, with songs extremely well performed. It’s a high production, with very well selected tones, as well as the arrangements. In “Take What You Need” and “Honey” it’s clear the soul approach, giving swing and movement for songs that, essentially, are blues and rock at the same time.

I think that, for a musician, it’s a very difficult process to determine previously what kind of song will be the next composition, if it will be a ballad, or something more bluesy, etc. The real music comes involuntarily from the inside and reveals the inner personality, influences, and feelings of the songwriter. And Saladino shows with JSB Live, that he’s got a soul musician inside him. It’s unique the way that he notches and carves the songs, mixing blues, rock, soul, and R&B.