Stevie Ray Vaughan changed the face of blues rock, essentially wresting the mantle from British blues fanatics like Eric Clapton and Jeff Beck, and returning it home to the United States, and more specifically, back to Vaughan’s state of Texas. Although his life was tragically cut short after a 1990 helicopter crash, Vaughan’s legacy is incendiary, Albert King-inspired music that not only inspired so many to love Vaughan’s music, but also got them going back to listen to the masters, like all of the Kings, who inspired him.

This isn’t a Vaughan song, but it’s an important one. Vaughan played on the hit 1983 David Bowie album of the same name, famously bailing on Bowie’s tour at the last minute, worried about losing himself in Bowie’s gravitational pull. The song brought Vaughan’s singular guitar work to the masses and his pure blues licks were positively subversive.

A fiery take on a Howlin’ Wolf classic, this song appears on the posthumous In the Beginning album, a show recorded back in 1980 when Vaughan was just Stevie Vaughan. The album is raw but you can easily hear his genius throughout the entire album.

A ballad from Family Style, Vaughan’s 1990 album with brother, Jimmie. While Vaughan is known for his guitar work, this is a particularly lovely vocal performance.

This is Vaughan going head-to-head with his hero, Albert King, on a slow blues. Both guitar players wring every bit of emotion out of their guitar, but only King could get away with filling his pipe while Vaughan is playing his heart out.

A beautifully soulful track from In Step, it shows Vaughan integrating his sobriety into his songwriting, aided by his collaborator, Doyle Bramhall. The track is also a good reminder of just how funky Vaughan could get.

Vaughan was also a devout Jimi Hendrix disciple, covering everything from “Third Stone from the Sun” to “Voodoo Child.” But this gentle instrumental, which appears on the posthumous Sky is Crying, shows that as much as Vaughan loved and respected Hendrix, he wasn’t a clone.

4. Mary Had a Little Lamb

While Vaughan seemed to have swagger to spare, he was actually shy and self-doubting. This Buddy Guy cover from Vaughan’s 1983 debut, Texas Flood seemed to influence Vaughan’s ideas about how to craft a playful blues persona. No one ever went wrong taking cues from Guy.

One of my personal favorite Vaughan tunes, it’s a great riff that manages to find new ground in the well-tread world of blues licks. It’s also a strong vocal performance paired with a classic solo, with Vaughan rebooting the song when he shifts into his break, then managing to get the song back on track by the time he’s done. Almost like he’s walking on a thin rope hundreds of feet in the air…

Vaughan’s signature song, you hear the riff and instantly think of him. It’s a classic that feels like it’s a part of the blues cannon. If there’s any doubt how good a song this is, check out Vaughan’s acoustic version from his 1990 MTV Unplugged set. Even with just voice and guitar, the song grabs you and doesn’t let go, acoustic or electric.

Steven Ovadia writes about music and technology. You can see more of his music writing at https://steven.ovadia.org/music/. 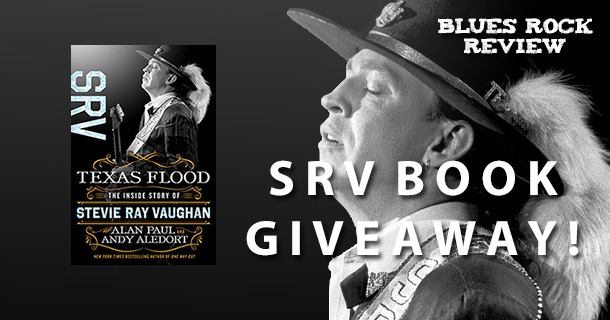 Texas Flood: The Inside Story of Stevie Ray Vaughan Giveaway