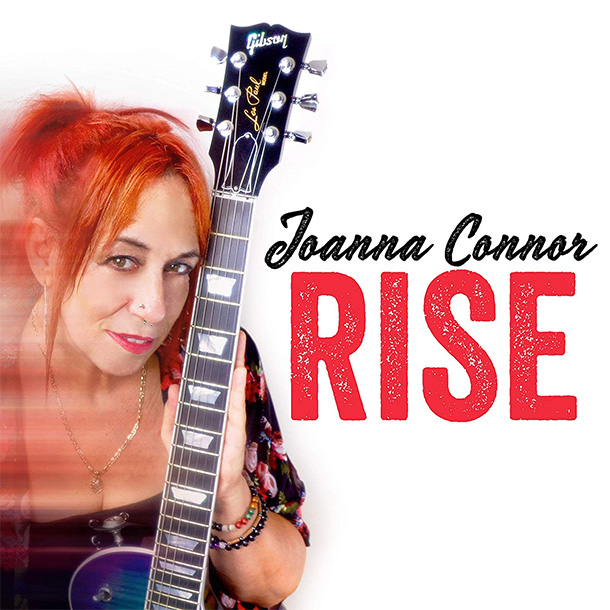 I first stumbled upon Joanna Connor on YouTube, watching her perform an incendiary, electric cover of Son House’s “Walkin’ Blues,” seemingly performing at a backyard barbecue. It’s not unusual to see a flashy guitar player on YouTube, but Connor’s soulfulness and technique really jumped out at me. And apparently with others, as the video has been viewed over five and a half million times. So I’m happy to report that her album, Rise, lives up to the viral-induced hype.

In many ways, Rise surpasses the hype of the YouTube performances, in that the album provides an opportunity to get to know Connor as a complete artist, and not just as a stunningly talented guitar player. Rise has plenty of jaw-dropping guitar work, but it’s framed around songs, with the songs contextualized within the album, meaning everything feels connected, and it’s not a drive-by YouTube adrenaline rush (although, full disclosure, I’m addicted to that particular rush).

Connor takes on a few different styles, from pop to jazz to rap. Interestingly, one of the album’s best songs is one of the poppiest. “Earth Shaker” has a wild slide riff and a mid-tempo groove that, coupled with Connor’s bluesy vocals, make the song sound like an alternate version of Bonnie Raitt— one who grew up loving Black Sabbath. Connor’s slide opens the song and her guitar waits patiently for the solo, finally swooping in sounding like a rootsy Eddie Van Halen, high-pitched cries squealing out of her guitar, and harmonics floating off of her fretboard like a George Lynch fever dream. The wild playing works incredibly well against the otherwise-standard song, turning it from something merely pleasurable into an act of perfect rock and roll subversion.

Connor similarly cuts loose on “My Irish Father,” a Celtic-blues acoustic instrumental that sounds like Led Zeppelin’s “Bron-Y-Aur Stomp” crossed with Leo Kottke. However, while there’s a lot of hot guitar playing across the album, the album isn’t a shred-fest. “Since I Fell for You,” a Buddy Johnson cover, is solo acoustic jazz, with Connor spotlighting her vocals, which while not as acrobatic as her playing, have a power, intensity, and rawness that’s reminiscent of Joni Mitchell. “Dear America” is hip-hop, featuring rap by Alphonso Buggz Dinero over Connor’s slide. The song covers/samples Zeppelin’s version of “When the Levee Breaks,” Connor’s slide spending much of the song quietly supporting her guests, until nearly two-thirds of the way into the song, where she finally breaks out—all too briefly—before receding into the background. And Connor graciously turns the guitar soloing over to Mike Zito on “Bad Hand,” a lovely Bruce Hornsby-esque duet.

Rise is an amazing album with some of the best guitar playing you’ll hear this year. Connor’s also a strong songwriter and singer, so the album has depth. If there’s one knock on the album, it’s that she leans a little hard on her fretboard prowess, featuring four instrumentals. The real treat of the album is hearing Connor work within full-blown songs, showing off not just her guitar chops but a rootsy voice. I came to Rise because of the YouTube heat but I stayed with the album because Connor is a well-rounded artist. You’ll want to stay with her, too.

Steven Ovadia writes about music and technology. You can see more of his music writing at https://steven.ovadia.org/music/.