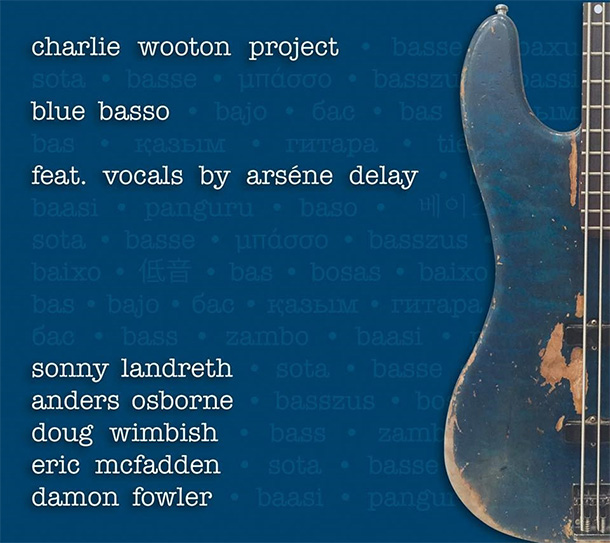 Bass players don’t get enough respect. They’re the pulse to the drum’s heartbeat in a song. They keep things moving forward when guitar players detour from the rhythm. And the low-end they deliver allows us to not just hear the music, but to feel it. Respect for bass is why we should all appreciate The Charlie Wooton Project’s Blue Basso.

Wooton is a Louisiana-born bass player and as band leader he’s earned the right to place the bass front-and-center in every song. However, as an experienced artist, he knows songs need balance, so this isn’t a bass-thumping extravaganza. Instead, the music explores blues, soul, and funk in a holistic band context, aided by a number of guest stars.

Situating the songs in a band is one of the strengths of this album. These kind of project albums often feature more of a rotating cast of musicians, which offers a lot of sonic variety, but makes it harder to suss out the band’s true sound. Wooton has no such challenge here. The band is funky, mostly thanks to his bass-work, but certainly aided by Keiko Komaki’s keyboards and Daniel Groover’s solid rhythm guitar. Singer Arsène DeLay handles the vocals with a powerful, soulful voice that more-than stands up to the music.

The real treat of the album is the two tracks featuring fellow Louisiana resident Sonny Landreth. “Tell Me a Story” is a fast-paced blues romp. DeLay’s vocals aren’t rushed, though. She exudes calm while backed by a fun, manic band, led by Landreth’s trademark slide, that always manages to sound both pristine and filthy at the same time. Landreth also appears on “Front Porch,” an acoustic instrumental, no doubt mean to evoke the front porch jams that seem to only take place in stories about the 1970s.

It’s not just Landreth love; Wooton and his band do a nice job welcoming all of their guests into the tracks. “I Don’t Know” is rhythm and blues. DeLay’s almost-jazzy vocals bounce along with Wooton’s walking bass. The song would have a bit of an easy listening vibe in the hands of another band, but the musicianship elevates the song, as does Damon Fowler’s lap steel, which glides through the track, with the grace of a player entering “Fortnite.” P-Funk guitarist Eric McFadden shows off a voice like Stevie Wonder on a funky, keyboard-heavy cover of the Stones’ “Miss You.”

However, that welcoming nature of the album might also be its greatest flaw. There’s just not enough of Wooton’s bass personality in the album. Instead, what we’re left with is just bass volume. Listening to this made me think of the Allman Brothers Band’s Cream of the Crop 2003, a live album which features a ridiculously good cover of Derek and the Dominos’ “Layla,” and one in which bassist Oteil Burbridge steals the tune, grabbing melody lines, and throwing in solos, while also fulfilling his rhythm section responsibilities. It’s a wonderful performance, because it shows off Burbridge’s talent, without taking anything away from the song or the band. Wooton is a gracious, generous host, but when your name is on the front of the album, a little musical greed goes a long way.

– Tell Me a Story