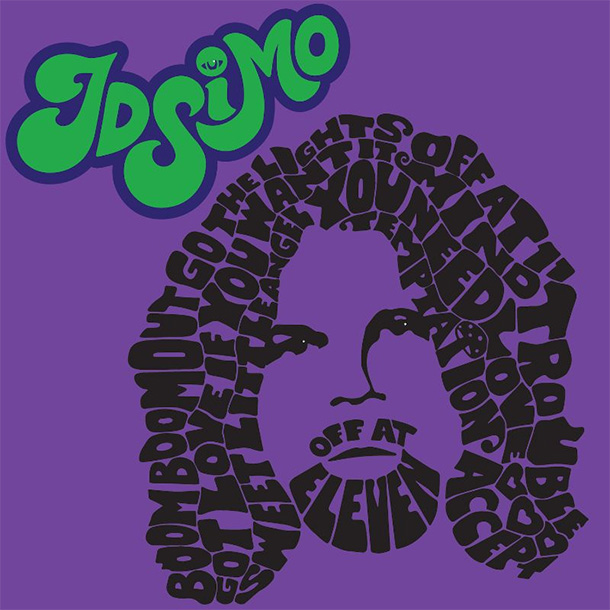 Blues rock and jam rock are two separate things. Both can involve a lot of soloing, but there’s something tight and punchy about blues rock guitar playing. The music never strays too far from a theme. And the groove might shift but it never really changes, where jamming is much more open-ended. Both kinds of playing are present of JD Simo’s Off At 11, an interesting solo debut from a talented singer/guitarist.

Simo’s a member of Phil Lesh and Friends and his record was recorded in just three days, so there’s a jam-based looseness to much of the album. But Simo also has the ability to rein things in and bring in a tighter, more blues-oriented playing. Interestingly, these styles don’t play out across songs but within them.

“Sweet Little Angel” is the perfect example of the two Simo sides. The B.B. King cover is recognizable from the first few notes, although Simo’s guitar tone breathes more than King’s, which was as tight and as sharp as barbed wire. Simo’s guitar wanders through the song, staying true to the melody, but exploring beyond it, before his vocals come in at around five minutes, more than halfway through the song. The introduction of the vocals tighten things up and introduce a laser-like focus to his playing.

Simo’s a fantastic guitar player, which often correlates to an average-at-best voice, but his vocals are very strong, with a blues texture a la Gregg Allman or Warren Haynes. It’s also the conceptual opposite of his guitar playing, in that there’s a beautiful naturalness to it when he’s singing in a more laid-back style. “Got Love If You Want It,” a Slim Harpo blues rumba, is one of the album’s best tracks. Simo sings in a slightly higher register that forces him to relax his voice just a tiny bit, taking him out of Allman territory and putting him firmly within rockabilly. It’s a great fit for him and for the song. His guitar playing, unlike his voice, is manic yet also somehow focused, a Marie Kondo’d chaos. All of it heard together make for an outstanding sound.

Simo also changes things up with “Temptation,” a sexy, soulful tune, a la the Black Keys. Simo uses spacey guitar tones and his more relaxed singing voice. Which isn’t to say he gives a dull performance. Simo puts a lot of emotion into his singing, and there’s just a hint of reverb on his voice that matches his other-worldly guitar tone. Like “Got Love,” the voice and guitar make for a winning combination, especially when he throws some Middle Eastern riffs into the solo.

Simo’s a talented guitar player so it’s not surprising he wants to stretch out—especially given his gig with the Grateful Dead’s Lesh. Jam fans might appreciate the jazzy detours some of Simo’s songs take (“Accept,” the final track is almost 17 minutes long!). But blues rock fans might be less enthralled by the sonic journey. However, there’s still a lot of interesting, tight guitar playing across the album, and Simo’s voice is surprisingly versatile. This album was made quickly, which makes its quality all the more impressive, but it’ll be interesting to see what Simo can do with more time to plan and execute his performances.

– Got Love If You Want It

JD Simo releases “One Of Those Days” single