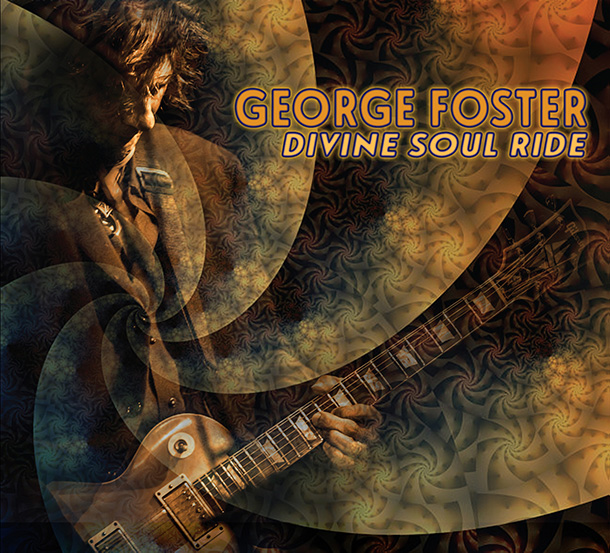 Divine Soul Ride is the first album from Los Angeles based George Foster, a fella who in his younger days appeared in Wayne’s World, as the guitarist playing alongside Tia Carrere. As you might expect then, he and his band aren’t about to serve up a plateful of acoustic Delta field songs – their diet is very much hard rockin’ blues.

To begin at the very end, closing track “The Fields Of Aberdare” demonstrates that Foster can put together a widescreen epic if he puts his mind to it. Founded on an interesting, twisting riff, it builds patiently, draping the vocals of Jarrett Williams in a touch of reverb as he tells a tale of a wanderer who can never go back home, with guitar licks nicely counterpointed against the riff, and some enjoyable shifts in tone. Okay, so there’s some unnecessary tapping, but it does sign off proceedings in satisfying fashion.

At the other end of the album, they kick off with straight ahead blues-infused hard rock, on “Dancin’ With The Devil” and “I Did My Time”, the former featuring a 21st Century rollin’ an’ tumblin’ type riff, and the latter a catchy chorus, even if the lyrics – as they are elsewhere – could have done with more work. “My Cheatin’ Ways” underlines Foster’s handy way with a complex, ducking and diving riff, but also his tendency to overdo the scattering of wah-wah licks between every line.

What then becomes apparent in the middle of the album is that Foster is an aficionado of Hendrix’s combination of funky, choppy riffs and the aforementioned wah-wah inflected soloing, and with some neat bass lines from John Hart thrown into the mix they make a good job of capturing those essential Jimi components. When they add in some light and shade, as on “Evangeline” and “Secrets”, or a typically strong riff such as the ascending figure on “Hard Times”, the results can be pretty satisfying. What they don’t have though, is either the personality of Jimi’s lyrics and vocals, or the head-turning wit of his arrangements. But on the latter point, to be fair, who does?

Divine Soul Ride is a well-assembled, likeable collection of blues-rock, strong on clever riffs and with some good hooks. It should also be said that the sound is excellent, unfussy and well balanced. As debut albums go, it’s a decent marker. But I reckon that George Foster and his pals can make something more distinctive, when they find their own voice.

– The Fields Of Aberdare