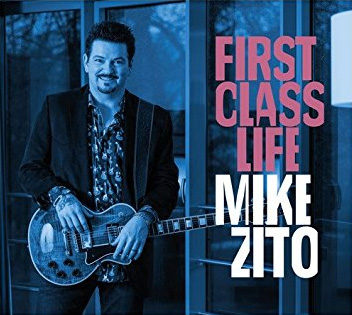 Mike Zito said in relation to his new album: “I had this idea of ‘stepping up’. I want the world to know I can play this music with conviction and style.” He obviously can, as he just won Rock Blues Artist of the Year at the Blues Foundation Awards. First Class Life sees strong vocalist/guitarist Zito joined by Terry Dry on bass, Matthew Johnson on drums, Lewis Stephens on keys, and a guest appearance by Bernard Allison.

With the opening track “Mississippi Nights”, Zito conveys to us that he’s going to grab Blues by the horns with this record. The distorted slide guitar is irresistible and the lyrics are infused with references to the birthplace of the Blues, Muddy Waters and Robert Johnson. Needless to say it rocks hard with a pinch of soul too (if you’re familiar with Zito’s music). The next track – the title track – takes a slight change in genre style which feels a bit unusual in comparison to the rest of the album. Especially within the chorus, we’re getting a Country Rock kind of feeling while the lyrics are summing up Zito’s story of starting at the bottom and ending up happy as ever closer to the top.

“I Wouldn’t Treat a Dog (The Way You Treat Me)” is one of only two songs on the album not penned by Zito (originally a Bobby Bland song), but this cover is a highlight. We’re getting a treat of double keys from Lewis Stephens; that’s a touch of Wurlitzer AND organ backing. There’s groove. There’s soul. And Mike Zito’s vocals are so very comparable to Gary Moore with added raspiness. It’s a great track.

In “Mama Don’t Like No Wah Wah” we find the help of Bernard Allison (both in writing and performing). This is a more guitar driven adventure with some tasty lick-trading towards the end. “Old Black Graveyard” conjures up a theme which is ominous and sinister. The fuzzy guitar and reverb-laden slide work seem to give a slight Spaghetti Western/Horror feel, which wouldn’t feel out of place in ‘From Dusk Till Dawn’.

“Dying Day” incorporates a more Blues shuffle notion and well improvised phrasing from Zito, while “Back Problems” has a funkier progression with some humor added to the novelty lyrics grasping a mundane topic.

Another highlight is the second last track “Damn Shame”, a slow Blues where we get a much better chance of hearing Zito flesh out his techniques both vocally and on the guitar. His use of octaves in a jazzy kind of style interjects at times throughout, complimenting the song quite neatly.

Overall, First Class Life shows us that Mike Zito sure is proficient at playing the Blues (with a whole lot of Rock influence) in many moods and styles (his previous album Make Blues Not War was heavier on the Rock side of things). Zito’s song writing capabilities in particular have heavily developed over the years, and we can tell from this album. At 48 and on his 15th album; singer/songwriter/guitarist Mike Zito shows no stopping with this latest release First Class Life, which is easily one of his best yet.