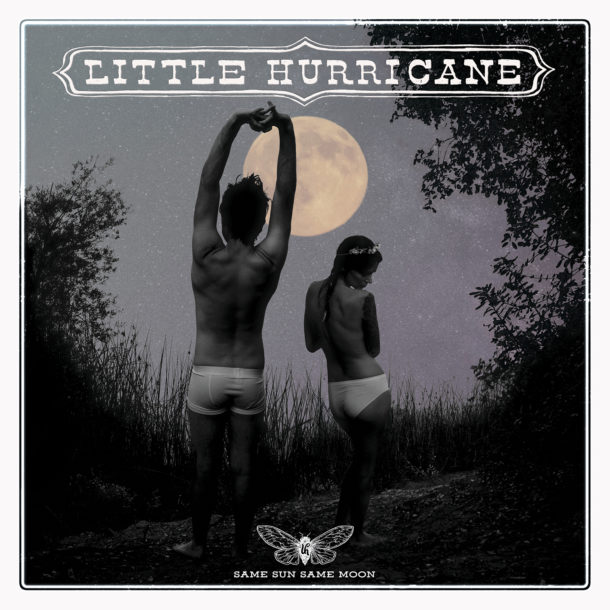 Little Hurricane, big impact. The two-piece rock outfit from San Diego, California celebrates the release of their third album Same Sun Same Moon on April 14, a studio effort that continues the duo’s tradition of maintaining a full-band sound and shows lyrical and musical growth since their last release in 2014. Let’s take a step back: odds are good you’ve heard whisperings about Little Hurricane, if you haven’t already seen them in person (they’re on the road a lot: their gig history includes performances at Lollapalooza, Austin City Limits and four years of South by Southwest, with a hometown appearance at the second annual Kaaboo coming up this September). Last fall, Little Hurricane signed to Mascot Label Group, the label that’s home to Beth Hart, Eric Gales and Walter Trout, among others. Though recently tagged as the new notable husband-and-wife duo of the blues-inspired rock world, bandmates Anthony “Tone” Catalano and Celeste “C.C.” Spina resist the White Stripes comparisons and insist that their work is – and has always been – first, foremost and only about the music.

Still, new music tends to be rooted in inspiration, experience or a combination of the two. Same Sun Same Moon has a couple of starry-eyed tracks (including first single “OTL” and “Isn’t it Great”) that the duo acknowledged were influenced by the relationship they started years after forming the band as friendly strangers in 2010. Little Hurricane took time for this new collection, letting inspiration find them as they traveled through California from Alpine to Lake Tahoe with their home studio in tow. Though “OTL” doesn’t feature guitar at all, “Bad Business” is a riff-driven track that stands out as one of the album’s best, its rhythm and tone seeded in the “dirty blues” style that Tone and C.C. pursued during their early years together. “March of the Living” and “Mt. Senorita” are also strongly tied to the duo’s blues roots, with “March of the Living” serving as the album’s only lyric-free track.

Little Hurricane’s most popular song preceding this album has been “Sheep in Wolves Clothes,” a narrative-driven track from 2014’s Gold Fever that symbolized a new phase in the band’s lyrical development. Little Hurricane continue this progression on Same Sun Same Moon, stepping even further away from the repetitive lyrical traps they fell into on their first record – all while exploring new musical territory. Little Hurricane apply their blues and classic rock influences to music that is brave enough to explore sounds commonly heard in rock, pop and alternative music. Same Sun Same Moon is an interesting record with no simple label or category – and that’s a big reason for why it’s enjoyable to listen to.

– Bad Business
– March of the Living
– Mt. Senorita
– For Life