John Mayall is one of the most important influences to nurture and promote new British  “blues rock stars,” over the past six decades, and at 82 years of age they call him “the godfather of British blues.” During the mid and late 1960s Mayall put together a number of band combinations that resulted in the formation of both “Fleetwood Mac” and “Cream,” along with Mick Taylor replacing the deceased Brian Jones as lead guitarist for the “Rolling Stones.” Although many of his early influences were guitarists, he is an equally adept keyboardist and is currently on a tour that features his keyboards. In 1962 he was a 30-year-old graphic designer who left his day job to form a band that backed American blues legends like John Lee Hooker and Sonny Boy Williamson. Over the ensuing decades he has released a total of 64 albums with Find A Way To Care, his newest, comprised of all new material. As the Tour began, John took time out of his busy schedule, to talk to Blues Rock Review’s Bob Gersztyn about both the past and the present.

What was it that initially drew you to the blues and how did it inspire you to form your own band?

You’re really going back a bit. I grew up listening to jazz and blues, so it’s always been part of my life, since probably the age of 8 or 9 years old, I really don’t know, it goes back and is part of the family. So there you go.

Were there any artists in particular that influenced you?

Well, I could mention names, but most probably wouldn’t have heard of them, like Eddy Lang, Lonnie Johnson, the Mills Brothers,  I mean we’re talking about the ’40s now. It’s just confusing to people to get a list of names, because there are so many people, you know, who have influenced me or that I’ve enjoyed in my whole life, so you know, it’s just a massive subject.

Why did you decide to record Find A Way To Care?

When I set about making an album, if I’m writing songs, you just search around for a subject that is going to make enough material to be a song or a statement or something, so that was the songs. The song speaks for itself.

When you’re writing a song, do you usually write it at the studio or do you already have it ready with the band familiar with it, or do you teach it to them at the time.

I have it ready and we’ve worked together all the time, so we know each other.

What about the musicians that you used? Was there a particular reason why you chose them for the record or was it just because you were already working with them?

I have a permanent band consisting of Greg Rzab on bass guitar, Jay Davenport on drums and Rocky Athas on guitar on the album. Rocky is no longer with us. We now are a trio. Anyway, that’s who I work with when I record.

Is there any part of the country that you find more receptive to the blues?

No, they are all the same. As long as we communicate with people, that’s the thing. There are no differences. If you’re doing a good job, there shouldn’t be any differences.

I’ve seen you a number of times over the years. I used to live in Detroit, Michigan and saw you at the Eastown theater back in 1971.

Yeah, very likely, not too many places we haven’t played.

I hope you don’t mind me going back to some of this stuff,  but to me the first album by you that I remember was Blues From Laurel Canyon, and when I heard it in 1969. That was the album that really turned me on to the blues. I know that when you were doing that album, you were either hanging out or living with Frank Zappa, what was that like?

The Blues From Laurel Canyon is the story of three weeks in Los Angeles, you know, so all the stories really, one leads into another, but the whole thing only encompasses three weeks.

Well, during that three weeks you hung out with quite a few different people.

Yeah definitely it was a great exploration of Los Angeles and it was the thing that triggered me off to make sure that I was going to move there permanently.

Canned Heat seems to be in the album quite a bit, how did you hook up with them?

They were playing the “Whiskey” (Whiskey A Go Go) and they knew me through my recordings and I knew them and I would talk with Larry Taylor and rest of the guys and for a week I stayed at their house.

So you were staying at their house. Far out. When you were forming your early bands you were quite a bit older than everyone else. How did they look at you? Did they consider you to be a big brother or father figure to them?

I don’t know really, I was the band leader and put the bands together and picked the people who were best suited for what I wanted to express through music.

When you had Mick Fleetwood, John McVie and Peter Green all together in the band at one time was the thought of forming Fleetwood Mac on their minds yet or was that an afterthought?

They didn’t all leave at the same time. Peter Green was the one that probably instigated it, but then John McVie and been with me for years before that happened, so Peter was in the band and then Mick was in the band, so it started things off.

So was it the same way with Jack Bruce and Eric Clapton forming “Cream?”?

Yes, Jack was the replacement for John McVie and he was in the band for about three months and that was when Eric came back and they got to play together and that formed the basis of what they wanted to do next.

How did you come across Eric Clapton the very first time that you saw him perform and what about current favorites?

Well, he was in the “Yardbirds”and that’s when I heard him then. I hate to pick favorites because there are so many different people and different styles. There’s too many people and I don’t pick one out over the other. It depends on what mood I’m in and what I feel like listening to.

You’re continuing to perform and you’re in your mid ’80s now. I can’t imagine all the energy that it takes to keep on touring. Why do you keep doing it?

Well, we have a great time and enjoy playing with each other and reaching  audiences and spreading the word. So as long as I’ve full energy to give a dynamite show, that’s what I continue to do.

How many appearances are on your current tour?

When we’re on the road we work every night, we don’t have days off, so we drive from place to place. This one coming up is 3 1/2 weeks. The one we just finished was 6 weeks.

And then after that what are your plans?

Well, that kind of takes us up to the end of November and the beginning of December. Then the next batch is going to be our big tour of Europe in the Spring. We’ll rack up 130 shows at least next year, so it will be a busy year.

Have you toured in any of the South American countries like Brazil and Argentina?

Yeah, Yeah we have from time to time. There were many times over the years that we played at festivals.

What do you think about all the changes that have taken place both technologically and on the business structure side in the record industry in general from the time that you first began your musical career until now?

It’s very difficult to answer that. If I put out a record, it’s got my full approval and it’s the real thing. Every album that I’ve ever done has got my seal of approval. They are all very personal to me, so I don’t release anything that isn’t personal.

I was referring more to the business aspects of it and the recording technology and not what you are producing and does it make any difference in how you approach it?

No, not really. The whole idea is to get your music onto a record, to capture the energy and the feel of it.

So, it’s pretty much the same right now for you, as it was 50 years ago?

Yes, almost the same, it has to be. 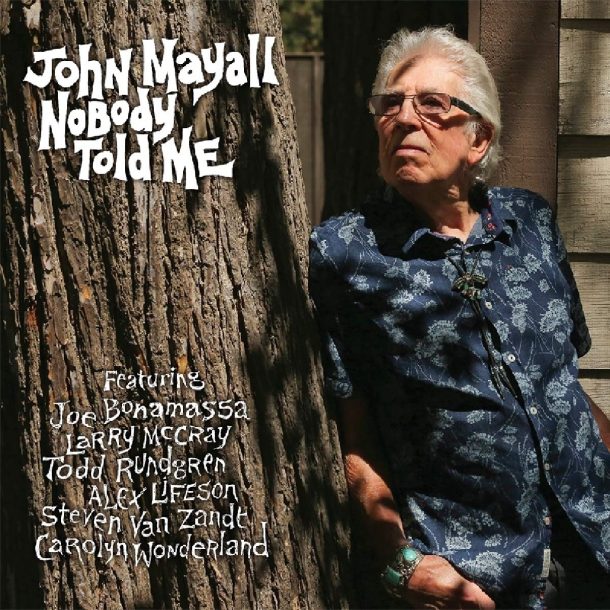 John Mayall: Nobody Told Me Review 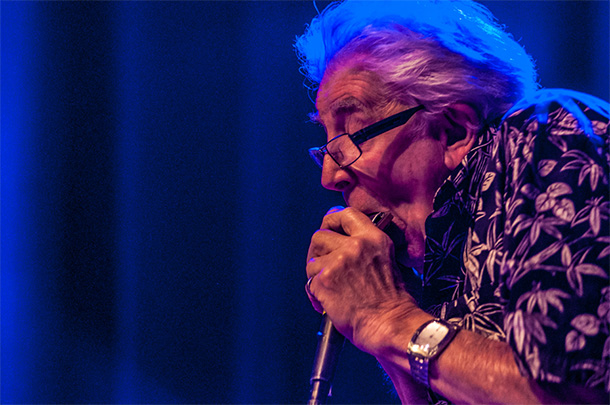 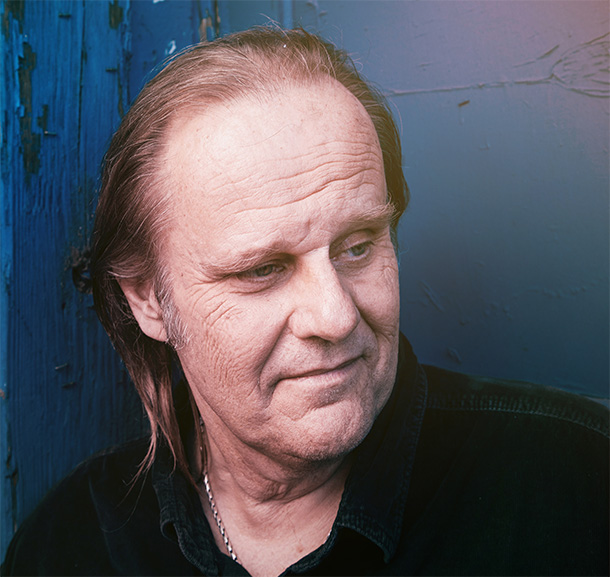