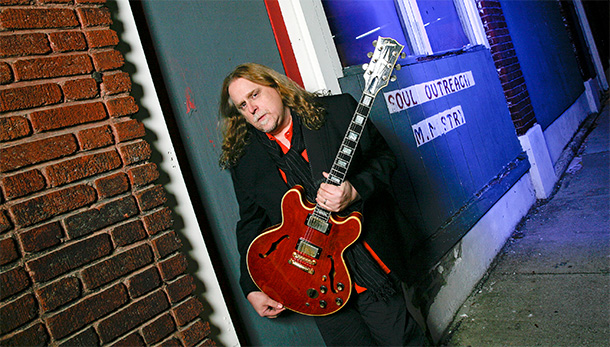 Warren Haynes is one of the most accomplished artists in modern day blues rock. Haynes spent 25 years with the Allman Brothers Band and is currently working on new solo material along with the release of multiple Gov’t Mule live albums, including Dark Side of the Mule on September 15th. Blues Rock Review caught up with Haynes to discuss Dark Side of the Mule, his upcoming solo album, and more.

On Darkside of the Mule, you’re covering 90 minutes worth of Pink Floyd? What drew you to covering Pink Floyd?

We had Pink Floyd on the list of bands and artists to cover for Halloween, and then Rick Wright died as we were trying to make our decision and that kind of made the decision for us. At that point we decided to turn it into a whole extravaganza. We brought in three female background singers, two of which had toured with Pink Floyd, a laser light show, a quad surround sound system, Ron Holloway to play saxophone and just kind of dived into it head first.

Is Pink Floyd a big influence on you?

Yeah, I probably first heard Pink Floyd When I was 13 or something like that and was very drawn to it then, became a huge fan, remained a huge fan. I think they’re one of the few bands from that era or any era whose music remains as timeless or possibly more timeless than when it was created.

Did you feel any pressure covering them?

No, only the pressure that we put on ourselves to do something good. We did a lot of preparation, a lot of homework, a lot of rehearsal going into it. Almost all of these songs we had never performed before, so it was quite an undertaking but that’s what we did every Halloween and in a different way every New Year’s Eve as well.

With your departure from the Allman Brothers Band, what does that mean for Gov’t Mule and your solo work?

The Allman Brothers Band has been talking for about three years as a group about making the 45 Anniversary the final year. It’s something we’ve all discussed at length. The decision kind of got a little misrepresented and misconstrued in the press, but that is a group decision. It’s very emotional. It’s been 25 years of my life and I was a huge Allman Brothers fan before I ever joined the band. I joined the band in 1989 for a reunion tour that was supposed to be one year and it just kept going and going and going, and it’s been a huge part of my life and a once in a lifetime opportunity.

Last year, Shout! was released with Gov’t Mule. Are you working on any new material right now?

Yeah, I’m actually working on my next solo record, which is gonna be completely different from my last solo record. And Matt Abts and Jorgen Carlsson are working on the new P.O.A. record, and Danny and I both made appearances on that record. We’ve haven’t started working on a new Mule record yet. We started talking about the direction of it and the type of record that we want to make, but we’re not in a hurry to start making it.

How is the new solo album different from Man In Motion?

It’s more centered around acoustic instruments and songs that I’ve been writing through the years that fall into a category of more singer/songwriter influenced material, but with a lot of playing as well. I’ve been in the studio in November and I’m going back in December with the guys from the band Railroad Earth. They’ve been kind enough to lend their talents to what I’m doing in varying degrees. And I’ve also had some other folks in there, Oteil Burbridge, but I’m just kind of exploring this direction that I’ve been wanting to do for a long, long time. I’ve been postponing this record for probably five years just due to other things taking precedence. But there’s a lot of songs I’ve written that fall under this heading, so I’m excited to record as many of them as possible.

Where do you see blues and blues rock going as a genre right now?

I think it always moves in waves. Blues music and blues inspired music is always gonna be around but it always takes the shot in the arm of somebody fresh coming in and delivering something that is influenced by the timeless blues music, but takes it to another place. Someone that has a strong enough individual voice to do that. I see a lot of young bands and young artists on the horizon that are kind of ready to forge their own path and not worry so much about what the music industry thinks they should do, and I think that’s encouraging and inspiring, and I think we’re going to see a lot of blues influenced music over the next two of three years that’s hopefully going to turn some heads.

Are there any artists in particular that you see taking the blues in different directions right now?

There are bands like London Souls that I really like. There’s this band called Earl Greyhound that I really like. And they both have blues elements as their influences, but they also take influences from different directions. Gary Clark Jr.’s doing some cool stuff and turning people onto his approach to doing blues influenced music. But there’s a lot of stuff out there that’s just starting to happen.

You’re known as one of the busiest musicians around. When you get some time away from the music, what do you like to do?

I spend all spare time with my family. That’s pretty much the deal. When I’m not working, I’m doing family.

What kind of music have you been listening to lately?

I always listen to soul music, blues, and jazz, and folk music, and reggae music, and a lot of music that’s been around forever. I listen to Joni Mitchell. I’ve been listening to a lot of great singer/songwriter music that I’ve loved since I was a kid, but I also love listening to jazz from 1955 to 1965, and blues from 1955 to 1965. Those are my favorite time periods for that music even though there’s great music throughout the history of both of those genres .

What’s next for you?

This solo record is going to be taking up a lot of my time. Gov’t Mule is going to continue to tour and promote this series of archival releases that we’re putting out in honor of our 20th Anniversary. We’re putting out the Dark Side of the Mule, then the Stoned Side of the Mule, which is vinyl only for Record Store Day, then we’re putting out Dub Side of the Mule, which is our New Year’s Eve show from several years back that we did an entire set with Toots Hibbert from Toots and the Maytals, and also a special appearance by Gregg Allman and John Popper. And then the fourth in that series is the Sco-Mule record, the live record with Gov’t Mule and John Scofield from ’99 that we’ve had in the can for a long, long time. We’ve been waiting for the right time to put it out when we could hopefully also do a tour together, which is gonna happen. We’re gonna release the record in January and do a tour starting in February with John and we’re very excited about that.

What are your goals for your solo work and Gov’t Mule in the coming years?

I want to make a straight up blues record at some point. I want to make an instrumental jazz influenced record at some point. I’m making this acoustic singer/songwriter record now. The next Gov’t Mule record I think the most important thing for us is that it be different than anything we’ve ever done, so I think I speak for all of us when I say we just want to continue to utilize and showcase more and more of our influences and to repeat ourselves as little as possible and to continue kind of adding to the picture and doing new music.

The 20th Anniversary is a big year for us. We’re all very excited and very excited about the archival releases that are being released, and Gov’t Mule is in a wonderful place right now. From a chemistry standpoint, we all feel great about where the band is and the touring has been wonderful.