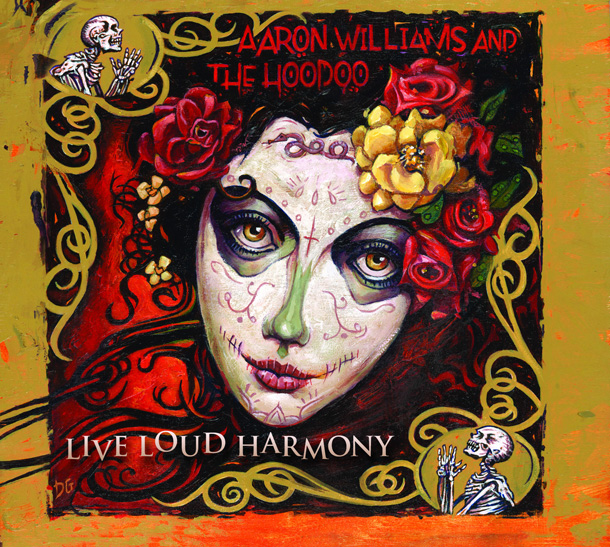 Aaron Williams and the Hoodoo have released a live recording, Live Loud Harmony, that does a good job of capturing the high energy of their unique mash up of blues, rock with a little rockabilly attitude that has gained them a loyal following in the Midwest. It’s a unique, energetic take on the blues best described as “blues and roll.”

This album starts off with high energy on “Boom Boom” and doesn’t let up on the gas pedal for the whole album. Aaron handles the guitar and the majority of the vocals. His powerful voice is perfectly suited to growling out the blues while bassist “Z” and drummer Eric “Shack” Shackelford lay down a tight groove that never misses a beat.

The new track “Supper at Night” is outstanding and “My Turn” is also a standout track where the blues purist and rock fan alike will both find something about them that they enjoy. This is a new modern style of the blues that expertly blends both genres. “Red Head Women” starts out with an introductory tease about the dangerous predators you need to know about by drummer “Shack” who then proceeds to sing a humorous PSA about the perils of red headed women. “It Is What It Is” is a funky jam where you can imagine the crowd dancing away. The Doors’ “Roadhouse Blues” is covered in the down and dirty style of George Thorogood. The album closes out with the full on rock of the title track from their first release “It Ain’t Easy,” which morphs into the “Star Spangled Banner” and eventually into “Gypsy.”

This is a band that truly deserves to be seen live just to feel the energy that they emanate. This album does a pretty good job of capturing their unique sound. If you’re able to get to one of their shows you need to pick up Live Loud Harmony; and if you can’t then you still need to pick it up just to get a taste of what you’re missing.

Aaron Williams And The Hoodoo: 10:49 Review

Aaron Williams and the Hoodoo Interview

Aaron Williams Blog: Welcome to the World of the Hoodoo