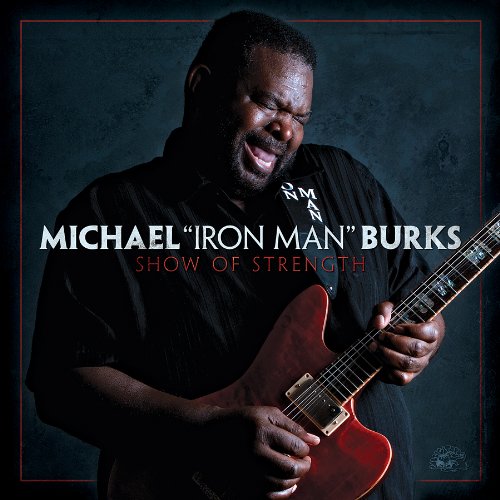 Michael “Iron Man” Burks final CD is Show of Strength (Alligator Records). This CD is released after his death on May 16 at the age of 54 of a heart attack while in an airport returning from a European tour.

He is backed by his band consisting of Wayne Sharp on keyboards, Terrence Grayson on bass and Chuck “Popcorn” Loudon on drums, with appearances by Roosevelt Purifoy on keyboards and Scott Dirks on harmonica.  He didn’t pick up the nickname of “Iron Man” by chance. If you never saw Michael live then you missed some amazing shows. His shows were known for being emotional, high energy, passionate shows where Michael left everything on the stage. On top of that it seemed like the guy was constantly on the road touring. Which was starting to pay off for him as the word of his incendiary playing was starting to help him build a strong following. His albums have progressively been filled with more songs penned by himself, which based on his own life took on a deeper and more soulful meaning. This album is probably his best work to date filled with his expressive guitar and excellent song writing.

Burks was a large man and the album starts off that way with a powerhouse of a song in “Count on You” which twists the meaning since the title leaves you thinking that it is a tribute to a girlfriend/wife when in fact he’s complaining that he can always “count on you to let me down.”

The second track, “Take a Chance on Me, Baby,” followed by the next track “Storm Warning” just continue the rock tour de force combination of Michael’s muscular playing and smooth soulful vocals. After those two powerhouse tunes comes “Can You Read Between the Lines,” which is a funky, slyly humorous song about the signs when your woman is cheating on you. I get a kick out of the line “When you kiss her, she acts like tried to bite her.”

“Cross Eyed Woman” evokes images of a laid back Jimi Hendrix thanks to the tight rhythm section and Michael’s superb playing. Shortly after that track comes the excellent “24 Hour Blues.” This is an often recorded song; but I think this is the best version I’ve heard. Michael really pours his heart out with some scorching guitar playing as he bears his soul expressing the pain behind this song with his vocal.

A driving bass propels “Valley of Tears” along while Michael deftly solos across the rhythm. The album suddenly slows down though with the standout slow blues, “Since I’ve Been Loving You,” where his guitar provides emotional fills between his vocal lines which when the two combine allow you to feel the anguish of him losing his mind over her actions.

The least rocking track of the album is probably the most bittersweet poignant track though. A cover of Charlie Rich’s “Feel Like Going Home” where Michael’s vocals are powerful in light of what happened and it’s challenging to get through it with a dry eye. The song takes on an even deeper meaning in light of his sudden passing. Considering all the tracks were finished and just waiting to be put in order for this release when Michael passed, I think they nailed it by putting this track last. It’s best to go out on the top of your game which is accomplished here. Show of Strength is an outstanding recording that unfortunately is Michael Burks’ final musical statement. I can’t think of a more fitting way to remember this blues rock titan.