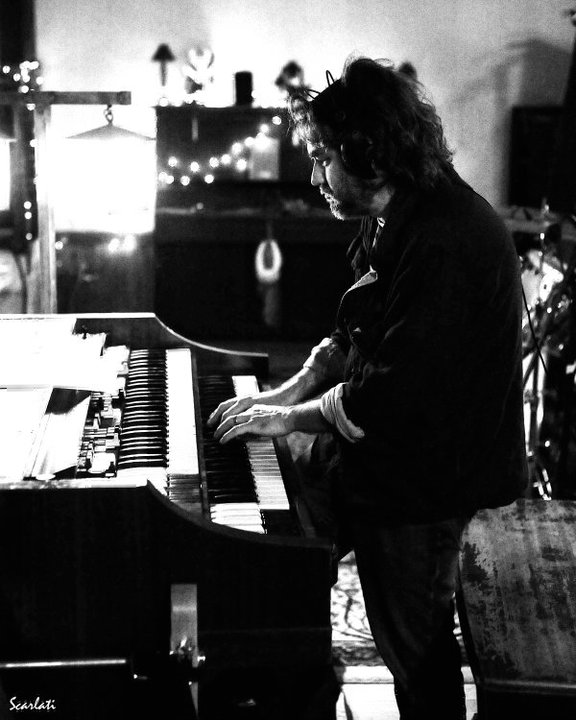 In June’s Sideman Spotlight, Nik Rodewald takes a look at the life and times of a sideman that has helped support many prominent artists of the Blues Rock genre. Today’s Sideman Spotlight focuses on keyboardist/guitarist Kevin McKendree.

Hatari! Perhaps there is no better way to describe the captivating power of music than this Swahili word meaning “danger.” For all who dare enter the world of music, there is a danger. The danger of obsession and the danger of allowing music to control one’s life. But this danger, this obsession offers – like a gypsy’s crystal ball – a glimpse into the human soul. And while this danger, this obsession, this crystal ball may seize control of our very nature, it also acts as a friend and gives far more than it takes. Keyboardist/guitarist Kevin McKendree describes music as “a healing thing,” saying, “I wake up with music in my head. I love it. If I’m having a bad day for whatever reason, I’m really lucky if I have a gig to go play, because it will always make me feel better. It’s a healing thing. I can get to a gig and feel rotten and be tired or whatever and the second we start playing it all vanishes.”

Perhaps it is fitting that McKendree’s musical journey began with a glimpse into Henry Mancini’s “Baby Elephant Walk” from the film Hatari! Perhaps it is fitting that this “danger” has turned into passion, which radiates from McKendree every time he sits behind a keyboard or picks up a guitar. And surely it is fitting that – for this veteran sideman, whose keyboard and guitar have added a unique shade of blue to the recordings and performances of Delbert McClinton, John Oates, Brian Setzer and countless others – his musical odyssey began with nothing other than a 12 bar blues.

Fortunately for McKendree, he had several family members who played instruments. His grandfather taught him the left hand part to the “Baby Elephant Walk” (which would be the first thing McKendree learned to play) and he also learned from his dad and other musical family members. According to McKendree, “I was around people that played music. It was just in me and I had to do it.”

McKendree immediately started on piano, and picked up guitar soon after, influenced by B.B. King. Says McKendree, “I started playing guitar when I was seven or eight, learning how to bend the strings, or trying to anyway with all my might.” McKendree’s practice soon paid off and he found himself playing with other musical family members. If there was any doubt as to his future, it was erased that day. “We were just playing rock and roll and 12 bar stuff,” McKendree recalls, “It felt so good to play with people; I couldn’t keep the smile off my face. I tried. I was embarrassed because I was practically giggling it was so much fun.”

Then in the seventh grade, McKendree found some fellow musicians at school and formed a rock and roll band, where he started on drums, eventually finding a drummer because he wanted to play guitar. Throughout his high school days McKendree played in various rock and roll bands in order to satisfy his love for music.

Despite early recording and performance success with D.C. Blues legends Big Joe Maher and Tom Principato, McKendree was having a tough time making ends meet. Like many other musicians, he took a day job: selling pianos. Needless to say, McKendree would rather have been playing pianos than selling them, and he eventually quit his job. “One day I told my boss I was going to quit,” said McKendree, “I didn’t know what I was going to do, because I needed the money, but I just couldn’t do it anymore.” Not knowing what to do, McKendree wrote a letter to one of his mentors – Chuck Leavell, the piano player for the Allman Brothers and later the Rolling Stones – asking if he knew of any opportunities.

As fate would have it, there was an opportunity. After quitting his job selling pianos, McKendree called his wife to tell her that he had just quit his job. McKendree describes the phone-call, “I called home to tell my wife that I quit my job. She wasn’t there, so I decided to check my messages,” begins McKendree, “I had a message from Lee Roy Parnell saying, ‘Hey! This is Lee Roy Parnell. I got your number from Chuck Leavell and he says you’re a piano playing man.”

The rest – as they say – is history. McKendree sent a demo to Parnell and was eventually hired into is band. After commuting between Nashville and D.C. for about a year in 1994-1995, McKendree made the permanent move to Nashville, and was a member of Parnell’s band for the next four years.

Despite playing on numerous albums with Lee Roy Parnell, Anson Funderburgh, Tinsley Ellis and the aforementioned Principato and Maher, McKendree is likely best known for his nearly fifteen year stint as country-blues great Delbert McClinton’s band-leader. During that time, McKendree played on five of McClinton’s records, including the 2005 Grammy Award Winning album The Cost of Living.

According to McKendree, playing with McClinton is when he first “started to get really good work.” Sessions and performances with Brian Setzer, John Oates, T. Graham Brown and several records for the Delmark label in Chicago highlight some of McKendree’s work while with Delbert.

Since leaving the Delbert McClinton band, McKendree has remained busy, touring with Brian Setzer’s Rockabilly Riot Band, John Oates and playing with Nashville legends Jonell Moser, Mike Henderson and the McCrary Sisters. In addition, McKendree owns and operates his own project studio, The Rock House, in Franklin, Tennessee and considers himself – in quite the literal sense – to be living his dream.

When McKendree was in his early twenties, he had a dream that he never forgot. Fascinated by recording at an early age, and working in studios from the time he was fifteen, McKendree had a dream in his early 20s about a small project studio with a loft. Says McKendree, “I remember waking up from that dream and saying, ‘I’ve got to have that place.’ But it was a pipe dream; I had no money and there was no way I ever thought I could do it.”

But the dream stayed with McKendree. Eventually, in 2004, he was able to make the dream a reality. After reading and studying studio design and consulting with his friend and studio designer Vinny Constantine, he was able to build the studio that was in his dream. It is easy to detect the affection he has for the place as he proudly gestures around the studio and describes its features, “There are no standing waves, it’s a building inside a building, I’ve got really good isolation and really good, natural, warm tones,” McKendree begins, “So, when you put up a microphone, the sound is coming straight from the source; it’s not bouncing and reflecting.” Even so, the studio was originally just designed to be a place for McKendree and his friends to “make music…I never expected it to make any money.”

Yet, after eight years, he has produced somewhere between fifteen and twenty albums at the studio, as well as numerous demos and other projects. Yet all projects come by word of mouth. Says McKendree, “The word has spread that I’ve got this cool little place where we’ve got a vibe and the sound is great.”

Yet, despite his love for recording and producing, McKendree professes a great love for the diversity of his profession, saying, “I love recording, which is why I built the studio…I really enjoy it, but I don’t think I would only want to play on records and be a session guy and I wouldn’t only want to play live gigs. I love it all and the diversity of everything I do.”

McKendree recounts a reflection on diversity that he had, while flying from Australia – where he was touring with Brian Setzer – to Europe to start a tour with John Oates: “I’m going from one completely different world to another in more ways than one,” McKendree begins, “I’m going from this rockabilly high-energy thing to the more sensitive songwriting of John Oates. It was quite a difference, yet I really love the fact that I fit well into both situations. That’s what keeps me interested and growing as a musician.”

It is this diversity – McKendree claims – that makes a great sideman. According to McKendree, being a great sideman involves always thinking of the song, and what one’s part needs to entail, whether it be one note or a thousand. “It’s very important – if you want to keep getting hired – to remember that it’s the song that is most important, not your chops,” says McKendree, “It’s not about you, it’s not about burning the fastest solo. It is about burning the right solo. It is about supporting the vocal. It is about locking in with the rhythm section and finding the right part that fits the song, not the one that shows everyone what great chops you have.” And – just like dealing with different songs is important – so is dealing with different people. Ultimately, McKendree summarizes, it’s about being the guy that they don’t think they can replace. That’s the “bread and butter. I need them to need me, so I go out of my way to be the right guy for their songs. That doesn’t mean I always am, but I try.”

And for McKendree, it is the diversity of music that keeps drawing him back, time and time again. While he has other interests, such as cars and physics, it is music that captures his heart. From the slick coolness of Henry Mancini, to the rockin’ energy of Jerry Lee Lewis to the soulfulness of Ray Charles and Percy Mayfield, it is all great music. From engineering and producing, to being a session musician, to playing live gigs and touring, it’s all great work and great music. And ultimately, what else is it about, other than “making good music with [your] friends?”