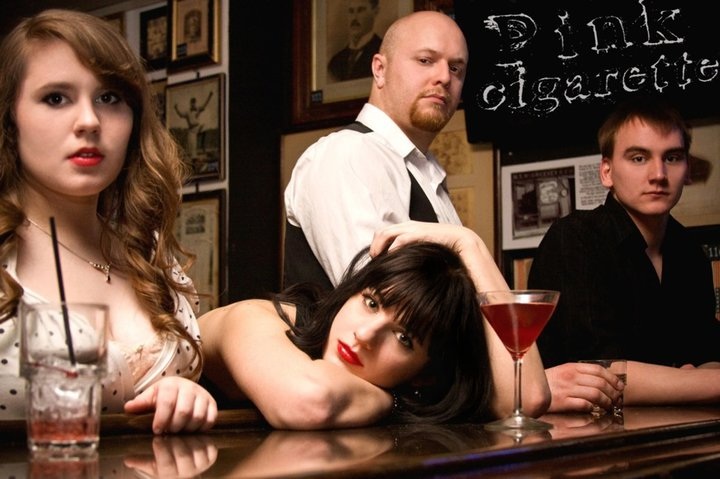 Pink Cigarette is a Boston-based four-piece band that recently recorded their first full-length album. Consisting of a modest set-up of vocals, drums, guitar and bass, the band draws their inspiration from a veritable mix of genres. Firmly planted in the rock and roll, Pink Cigarette also hits notes of metal and blues while calling forth elements of classic rock. Their first album consists of nine tracks that demonstrate the different styles Pink Cigarette is capable of evoking. The band’s sound is indicative of a group trying to establish themselves as unique. On the whole, the music has a bold and in-your-face quality, regardless of the genre they invoke on a given track.

Pink Cigarette works best when they reach for a mix of blues and classic rock. The vocalist Andrea Wiseman falls somewhere between Joan Jett and Stevie Nicks, with a very clear rock style. This fits in particularly well on tracks such as “Mama” and “Magic Eyes,” where the band backs the vocals with well-placed guitar licks and solid rhythm. There is quite a lot of initiative in a band that attempts to mix heavy metal and blues stylings. However, it does not quite work for Pink Cigarette, as the quality of the vocals does not lend itself to the overly distorted driving guitar on “Zombie Hands” and “Let it Go.” That seems to be the biggest problem with the album—Things sometimes just fail to mesh well.

Despite the individual talent of each musician, Pink Cigarette struggles to create a cohesive track in the process of seeking a new niche in blues-rock. On these metal tracks, the vocals come across as thin and overwrought and the guitar uninspired. Both of these qualities are unfortunate, as the exact opposite is true on the first two songs of the album. Instead of creating a unique blend of styles, whenever Pink Cigarette genre-hops, the sound comes across as confused and a little disjointed. This is perhaps best witnessed on the cover of the Beatles’ “I Want You (She’s So Heavy),” in which the entire song becomes so distorted that it is actually grating.

On the whole, there are some good things going on here. The classic rock blended with blues is enjoyable to listen to. It is a good style for both the instrumentalists and the vocals and results in some of Pink Cigarette’s best songs. With some tweaking, they could have a considerably interesting niche for their future releases.

One thought on “Pink Cigarette Review”