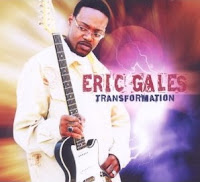 Transformation is the latest album from guitarist Eric Gales. Last year Gales released Relentless, which earned him the honor of being named “Best Blues Player of 2010” by Guitarist Magazine. Gales continues the momentum with Transformation, an album about personal experiences that features stellar playing as always.

Transformation begins with “Railroaded.” Gales sings about the experience that landed him in prison and claims his innocence and how he had been “railroaded.” The title track “Transformation,” which is perhaps the standout song on the album is about the personal demons Gales has faced with drugs and how he has “seen the light” and now it’s time to “stand up and fight for the transformation.”

Transformation is another fine effort from Eric Gales. The blistering playing you expect is there on tracks like “I Pity The Fool,” but the songwriting is some of the best Gales has done. Hopefully his past problems are behind him because Gales’ musical career is definitely on a roll.