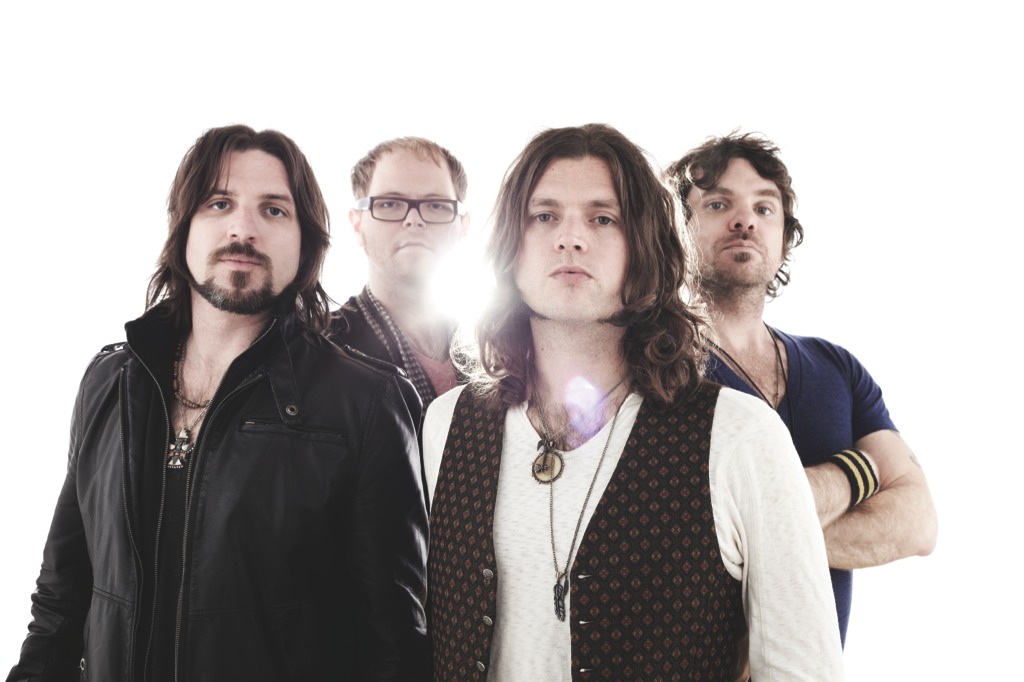 Rival Sons have been making quite a bit of noise this summer. The Los Angeles based rock band released their critically acclaimed new album Pressure and Time in June and are currently touring Europe. We had the chance to speak with guitarist Scott Holiday on the phone from London.

The band is still fairly new, how did Rival Sons come together?

Yeah, well a few years ago, maybe four years ago I had been playing with the drummer (Mike Miley) and bass player (Robin Everhart) and we just came together to get the quick story out we had mutual musician friends. I met Miley, my drummer and he had met our bass player, Robin, at a jazz gig they did. We had another singer, we signed a record deal, and we kind of got fiddled around on the record. It didn’t come out, we held the record and I decided I wanted to work with someone different and another writing partner and I came across Jay on the internet, literally surfing the interwebs and that it was serendipitous that when I told the guys this was the guy, this was the person I wanted to work with, and that he was really really good. And he was just doing like acoustic music, like acoustic kind of folky-soul, but playing an electric guitar alone, so that’s what I heard. It was really stripped back. When I told them about this, Miley said they had already known him and had been in a band with him years earlier. It was was kind of like a happy coincidence, like oh my gosh it’s trippy. We contacted him, and put him in contact with me and we hit it off really quickly, a lot of urban blues, mostly blues or early blues and rock and roll. That’s the quick story how we all got formed.

Pressure and Time has been a pretty big success. The single had over 300,000 viewers on YouTube in the first week or two, what was your reaction to that?

Yeah, you know, how do you react? We’re just really happy, you know we’ve been doing it, doing our best, kind of amazing, you know like wow that many people are watching. And you just keep watching it and we’ll click in every time you watch it cause maybe like 100,000 of those are just ourselves. (Laughs) That was our immediate reaction to it and then we found out that’s not how it goes. (Laughs) Just trying to do more Californian. (Laughs)

This album was recorded in a relatively short amount of time. What was the recording process like?

Immediate, visceral, reactionary. We went in with no songs, I had song ideas, Jay had some ideas, but neither of us had shared them with each other or the rest of the guys in the band. We came off a four week tour and had been talking about what we were going to do and how we wanted the sound and kind of just sketching it out verbally to each other, especially me and Jay. When we got home from the tour we basically dropped our bags the next morning and went in the studio to start recording. So we just decided to write the record on the spot, that’s why I’m giving you these words because it was really just every day I would either come up with a riff or we’d make something new in the studio that day and record it right there live together, like immediately.

The song “Get Mine” was featured in a commercial for Jeremiah Weed. How did that come about?

Yeah, that came through management … we have some friends over there at CAA. They got the record and immediately passed it over to them because they had heard that somebody was looking for something like that and we were against all sorts of big bands to do it. I guess they just liked our thing. The cool thing is they ended up doing a little documentary on us as well. We actually hit it off really well with the person they hired. Casey Neistat is the one who did this documentary, it’s for all those commercials. He actually ended up being a really heavy cat, he was in Afghanistan previously too doing the Jeremiah Weed thing doing some serious documentaries so we hit it off with him really good. Yeah, it came through our agent.

You’re currently in the UK on tour, how’s touring been going?

Amazing, yeah really really good reactions out here man. A lot of our push is out here in Europe so we’re either playing huge festival crowds, we’ve been really fortunate to get on main stages almost everywhere we go or really really good lineup second stages and the crowds have been, thank goodness for those, but you know 20-25,000 people and all of our headlining dates have done fantastic out here. It’s the weirdest thing ever cause we’ll show up in like Switzerland going you never really think lets go to Switzerland right, great place but who knows? And we played a pretty good sized club out there and it sold out as well, a huge venue that we had no idea what we were doing you know? Huge huge sold out shows, gigantic festivals, very good, also Norway great, and of course here in London it’s wonderful.

For those checking out the band on tour what can they expect from a Rival Sons show?

Lots of dirty rock and roll… we throw a lot of curve balls at each other when we play, but we try to keep it like the recording process, like the record, we want to keep it very immediate, visceral, and not really bullshit. We want to be able to tell the truth with our music and I think you’ll get a lot of that from the show, but yeah, you’ll get a healthy dose of rock and roll.

The band is currently in the midst of a vote to get Pressure and Time on MTVU. Can you fill us in on the details there?

I don’t know too much about it (laughs) but I do know you can vote as many times as you want and I think we’re out in front right now. We’re in the lead, on our tails is a band, Taddy Porter, which I know not too much about, but nice fellas and I think they contacted us. They wrote one of us on the internet and we said, our drummer said, “may the best band win.” And they ended up writing us back saying, “may the winner take the other band out on the road.” It’s like a healthy rivalry thing. Yeah, all I know is I think there’s a MTVU, if you Google that there’s a site, you go, there’s like five bands doing it and you can vote for Rival Sons. That is what you’re supposed to do, as many times in a row

The band is from Los Angeles, but has been receiving a lot of attention internationally. How important is the internet in terms of growth for a band like Rival Sons?

Oh yeah man, I’m sure you know the loaded question that’s entirely massively important, you know we can reach so many people so quickly now you know? We’ve got a kajillion videos up not just from people filming us and posting them up. I mean you just grow your fan base a week, just quadruple, it’s just crazy. I think it’s probably the most vital, that and radio are clearly the most vital things and then print you know?

It’s been a big year for the band, if you had to pick one highlight what would it be?

Oh, highlights for this year, can I pick this tour because we’ve done so much on this tour? We’ve been out, we came across the states and to Canada and then in Europe we’ve played 12 countries so far this month or so. If I had to pick the tour, if I had to pick a moment on the tour last nights show was pretty fun. Zurich, Switzerland was pretty amazing, yeah. Going to Switzerland realizing that many people are aware of us that rabid… I think the Switzerland night was a pretty good highlight so far.

Thank you so much for the time and we’ll be following you.