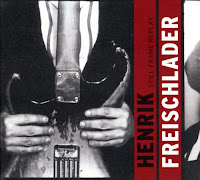 Still Frame Replay is the fifth album from German blues-rocker Henrik Freischlader. It is the follow up to 2010’s Recorded by Martin Meinschafer, which was outstanding in its own right. Still Frame Replay surpasses it.

While Freischlader’s past works have been mostly blues based he really brings the rock with Still Frame Replay. The album begins with the driving title track featuring a guest appearance by Joe Bonamassa, and is one of the strongest songs on the album. Still Frame Replay also features strong rock numbers such as “If I could Only be Myself.”

The album has it all with a variety of styles. “Gentleman!” is a catchy pop tune that would fit in on a John Mayer album, and the ballad “Growing Old” is one of Still Frame Replay’s standout tracks. The highlight of the album though would have to be “The Memory of our Love,” which clocks in at over 7 minutes and is a true blues gem.

At only 28 years of age, it seems there is only way place for Freischlader to go in blues world and that is up.

– Still Frame Replay
– The Memory of our Love
– Gentleman!
– If I Could Only be Myself
– Growing Old